About that Elm Bar 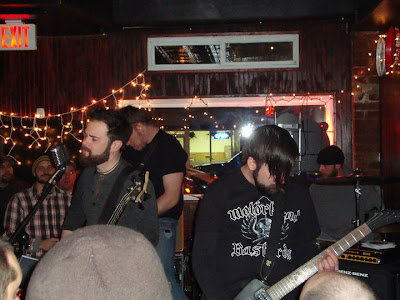 Previous posts have covered the closing of awesome New Haven venue Rudy's (a favorite Scenic destination in the past) and the re-opening of the physical location as Rudy's-esque Elm Bar, as well as the promise of a new actual Rudy's restaurant/bar which is still in the works. This weekend the Elm Bar started hosting live music gigs. I was there to take in the scene with Big Mike and Yale/New Haven legend Phil.
We started our evening down the street at Mamoun's - Scenics cannot get enough falafel - and proceeded to the bar with happy stomachs. The experience was Rudy's-esque from the beginning - the little outside fenced-in area is unchanged, and the cover charge was was only $3. And the door guy was a blast from my past - Adam from Groovski! That band was great! I totally love him! He's playing in a band called Procedure Club now. 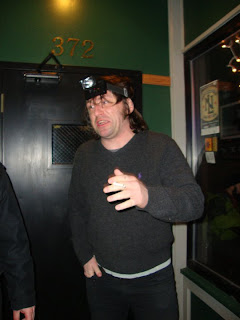 Inside was very crowded and kind of a sausage party, as the saying goes. Bearded sausage - as you'd expect for a stoner rock gig. Although there's a bunch of new stuff about the interior - the tables and wall coverings and a spacious third bathroom (for the third sex?), but they've made every effort to keep things the way they used to be. Patrons have been hard at work carving up the new tables. Classy! 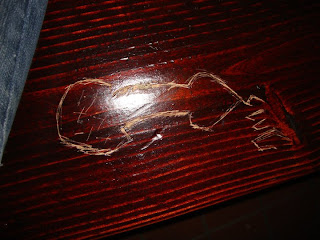 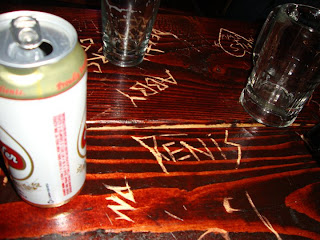 They aren't calling them Belgian frites or anything, but the Elm Bar is offering "Fresh Fries" and a variety of dipping sauces, which of course was one of the main attractions at the old Rudy's. We didn't actually see anyone eating these - maybe it made them feel dirty. The beer selection also reflected some Belgian roots, including my favorite girlie treat Lindeman's Framboise Lambic and this Belgian ale, Orval, that I tried (for free - thanks bartender guy!). 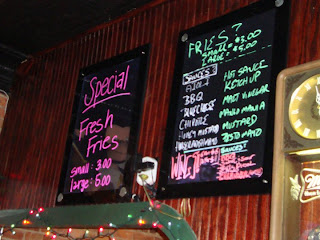 I'm not a very good beer critic, but I gave a taste to an expert and he said it was interesting in that it tasted like a white beer in spite of its amber color. Big Mike said it smelled fruity. I like the fancy bottle and thought it was drinkable, and that's all I really ask. Why don't you ask the Beer Advocate? 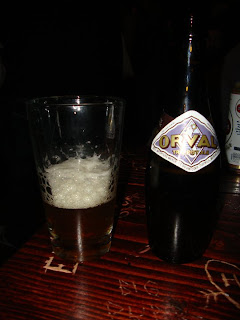 The arrangement of the bar is essentially unchanged from Rudy's days, so it's as cramped and uncomfortable for watching live music or attempting to hold a conversation as ever. The backroom is empty right now, but I imagine they'll be debuting a pool table any day now. We stayed for sets by Gasoline Therapy and Treebeard. Gasoline Therapy seemed pretty cool, until Treebeard blew them out of the water. Treebeard are a new, legitimately awesome, wicked heavy, Clutch-like stoner rock band. The jam they closed their set with was revelatory, and I will make the effort to see them again.

This outing drove home once again the staggering scene differences between Hartford and New Haven; there is no venue in the Hartford area where an original stoner/metal band can pull a packed house. And I can't think of a single bar around here serving Belgian style fries with a variety of sauces - much less pulling a vaguely sleazy copycat maneuver to keep the fried potatoes rolling the way we remember them.
Posted by Katie Scenic at 6:45 PM