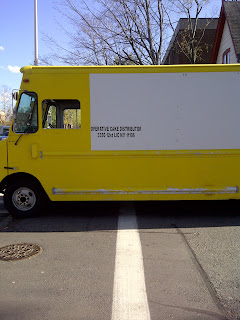 So mysterious. So yellow. 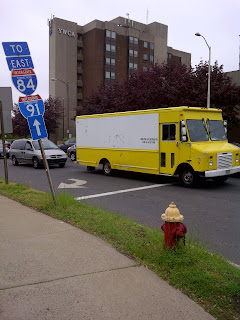 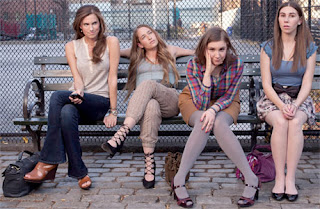 I'm talking about the HBO show of course! Since I am so guilt-wracked over letting my blog (this blog) die, and because I spend 40 hours a week in a cubicle typing furiously (but not about anything), I haven't been keeping up with the computer screen and its magical media commentary content the way I used to... Oh! Also because all the Gawker family blogs totally suck now, like Jezebel, the blog that used to be edgy and feminist and now posts articles like "are your fat co-workers making you fat?" But hey, let's not digress. I'm talking about how I haven't kept up with every piece of media criticism, but Girls sure seems to be lightning rod for bullshit critiques that I take exception to.

Of course I'm a little jealous of youthful writer/director/star Lena Dunham, who managed to string all her weird shit into a film and now a hilarious high-profile TV show about young women who remind me of actual people I might have encountered in my time as an actual writer in Hartford and a wannabe writer, adult intern and odd-jobber in New York City. But all I've got to show for it is this blog, that I don't even write.

Here's a not very revealing trailer!

Maybe it is kind of a niche market - a self-conscious comedy/drama for the over-educated, under-employed children of relative privilege. But the criticisms that the show is too white, or too white to be set in New York, or that the characters are unsympathetic, or unsympathetic because they've grown up privileged ring false to me. Is a racial diversity, parental wealth or likability of the protagonist truly the barometer for quality? No, that would be stupid, and nobody believes that anyway. I could name a zillion "exceptions" - many aired on the same channel - but that would be like conceding that there's a point. I think this is just part of an overall pattern of a culture whose masses by and large, enlightened as they may think they are, just aren't ready to let women be clever in the same way that men can be.

So let me talk about why this show is wonderful. Because it's smart enough to acknowledge its debt (or surface resemblence ) to Sex and the City in its very dialogue, while offering a down-to-earth counterpoint to that program about how truly non-glamorous it can be to try and cultivate a writing career and a cavalier approach to your sex life in NYC (or anywhere!).

Because even as it's characters are indeed obnoxious in their sense of entitlement, it's self-aware enough to show them as relatively incompetent. To me there is nothing funnier than the irony of being intellectually sophisticated enough to remark that men are wont to leave their penises inside you after sex, but socially retarded enough to make a date rape joke at a job interview that's going really well. The writing is really sharp. Tempered of course by the crass subject matter. But who can't appreciate a girl who wants to differentiate between "looking like a piggy bank" and "feeling like a piggy bank" during doggy-style? Well, probably people who actually can't appreciate that difference.  People who have never "hate-read" a book. (I have hate-read so much YA fiction while house-sitting it's not even funny.) I identify so heavily with the humor style on this show, I find myself nearly memorizing each episode on first viewing, and shocked that anyone could think less of it.

To those who think the show is just too frivolous, I'm sorry they can't appreciate the rather awesome feat of taking a subject that is serious, and that nobody likes to talk about or handle well on TV - like STD testing and anxiety about AIDS for the "hook-up" generation - and takes it pretty seriously in the same episode with a bunch of crude jokes. Like when Hannah has her legs spread, feet-in-the-stirrups verbal diarrhea about how maybe HIV wouldn't be so bad and perhaps it's just what she's always wanted, that isn't the takeaway message (the gyno rightly calls her back to reality, btw). It's like when I joke about how I'll probably spend my retirement eating catfood quesadillas. Not because I'm being capricious about poverty and people who have to eat cat food now, but because realistically I probably am going to have a dead-end career path even though I'm smart and have great work ethic and watch my relative income slip downward over the years and die a spinster while economic justice goes un-served so I better just get used to the idea and pretend to like it because it's what's outside that counts. Ha! Tragedy + time, babies!

Watch Girls on Sunday nights. Or watch Mad Men on Sunday nights and watch Girls on demand or on your iPhone some other time! I hope that next season they had to move home but still try to have hipster adventures and keep the dream alive in the old stomping grounds they maybe thought they were too cool for this season. 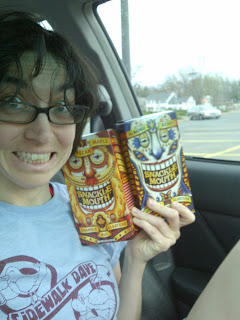 Struggling doughnut model Katie Scenic
looks to broaden her horizons
Even in our prime as a blog, we eventually let our feature "What's hot at the Lot" slide. Not because we weren't making purchases at Ocean State Job Lot anymore, but because our purchases had mostly become so mundane and repetitive (much like our grownup jobs, ugh).  Also the Lot has never thanked us or offered us freebees. But our initial attraction to the Lot was always as much about trying new weird snacks as it was about getting slightly to dramatically good deals on household items.
On a recent visit we were drawn to the garish, slightly frightening packaging for Snackle Mouth, a "granola nut clusters" snack from Colorado whose packaging boasts of small time roots ("developed by 3 guys named John") and wholesome ingredients. The scary box (huh-huh) is reason enough to buy it once. The delicious taste, which is like buttery, sweet granola, with less crunch than a cereal but not as chewy as a cookie, keeps bringing us back. We've much enjoyed the Almond Maple Pecan and Almond Berry varieties.
We love the wacky snackle-man illustration, with his dripping gooey complexion, crazy eyes, nutty lesions and jaunty pot leaf Hitler 'stache. But we do fear this might be off-putting to less perverse consumers. We hope it won't keep you from enhancing your life and your diet.
Posted by CT Scenic at 6:45 PM 2 comments: 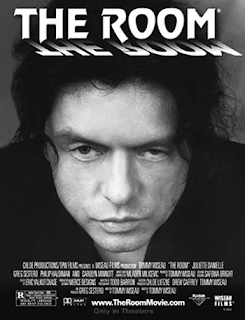 WTF?!, right?
Here at CT Scenic we like to go both ways. If we can't see a really good film, we'll just as eagerly embrace a truly terrible one - whether it's Bill Zebub's latest masterpiece (we totally know him) or The Human Centipede (Haha, remember that? How is it possible we don't have a Human Centipede tag? Someone's been asleep at the blog, obvi). And remember how The Human Centipede took forever to get to Hartford? Well, The Room took even longer. Like ten years longer. Exponentially longer! Because it's exponentially better! Or is it worse?

Widely regarded as one of the worst films ever made, The Room has been embraced by the ironic hipster masses in Rocky Horror fashion as a participatory event to relive again and again in the theater (with cat calls, props and costumes encouraged). Here's a helpful guide for newbies. The film has also  inspired many a youtube auteur - much to the fury of the führer:

Come and experience the artless direction, the inexplicable dialogue, the graphic, gratuitous lovemaking, the ill-fitting suits, the quickly forgotten cancer, the betrayal, the possibly retarded neighbor kid, the exquisite panning shots of the Golden Gate Bridge, and a wealth of other goodies for yourselves.

We'll be there, for our second time. Because second is the best, and because Real Art Ways begged us to post about it and invited us as special guests, and we pretty much just roll over for free stuff and validation from our favorite elite culture venue.
Posted by CT Scenic at 6:40 PM No comments: