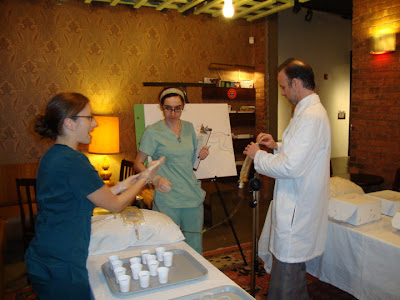 Back in September of last year I was first alerted to the existence of The Human Centipede by this blog post and immediately sent an email to DH with the link and the message "let's definitely not ever see this movie. in fact don't even click this link." But with all the hype and amusing novelty t-shirts and necklaces and supposed comedy (very tedious) that ensued, Team Scenic somehow ended up hosting the premiere of the film at Real Art Ways and attempting to coerce viewers into posing as human centipedes themselves.

In spite of a pretty good turnout - especially for a film that has already been available in various capacities for months, we had few participants willing to actually pose (check out the few, the proud on our FB galleries). Even for the opportunity to win this one-of-a-kind jewelry item by crafty bitch and BFF-of-the-blog SuperLula (though surely you can commission her to make more). 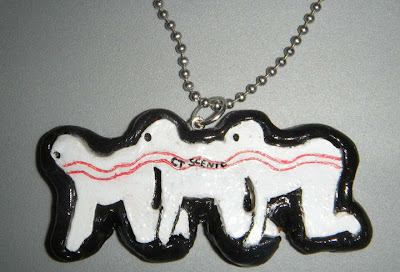 Still, we had a good time playing with our (impressively realistic!) medical props and costumes and feeding people fake drugs with fun explanations about muscle relaxants and immune suppressants and vitamin supplements and stool softeners. And of course latex gloves are never not fun. (Actually, these are vinyl.) 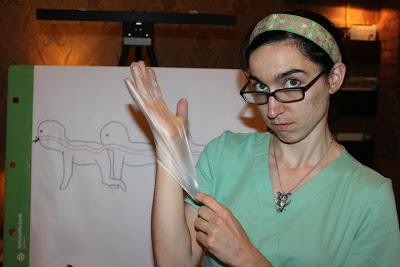 As for the movie itself, I would encourage you to take the remaining opportunity to see it on the big screen this weekend at RAW. The concept is so much more disgusting in its contemplation than in its on-screen execution. It was actually a lot of laughs (thanks to a combination of terrible acting, overacting and inept scriptwriting by director Tom Six), and I didn't notice any walkouts at our screening.

Hype about this film has included a tagline "100% medically accurate," which of course is completely absurd. But true in the sense that (**SPOILERY**) this film's rendering of an ATM human centipede would stand no chance at survival. Actually, I can imagine a much more horrifying film based on the same concept only with better medical accuracy. In the existing film, the surgical fusion is fast and glossed over. In reality, to attempt such a fusion with any hopes for a lengthy survival of the fused victims would take multiple operations and recoveries from a series of body modifications and treatments. This would be truly horrible to behold (consider The Fly, a much more affecting biological nightmare) and prolong the fear and anticipation for the both characters and the viewers. As it is, you get an unbelievable quickie surgery on characters who have been so hastily or unflatteringly portrayed to begin with that you barely sympathize with them anyway. There's oodles more "wrong" with The Human Centipede from a critical perspective, but to analyze is to miss the point here. We had a shit-ton of fun watching it, and even more fun anticipating it and developing an arsenal of centipede themed jokes and puns. Bring friends and think of it as participating in the culture.
Posted by Katie Scenic at 11:18 AM