On the Screen: In the Loop 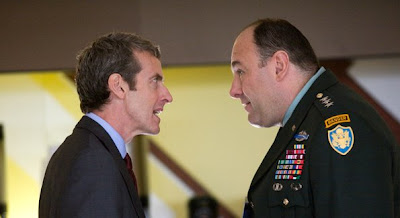 I've been looking forward to finding In the Loop at a theater since the title came up in an AV Club interview with British actor Peter Capaldi who stars along with American household names like James Gandolfini and former child star Anna "My Girl" Chlumsky. The interview happened to run the same week I was watching Capaldi nightly on this summer's rather hotly-anticipated (by myself and other sci-fi Anglophiles) Torchwood miniseries, Children of Earth, which was not necessarily everything I had hoped it would be... Frankly, I could have done without that tired "death of a beloved cast member as emotional currency" shit - but Capaldi was excellent as a (morally) slimy, cowardly politician negotiating with (literally) slimy alien aggressors.
A political satire with roots in a British TV series I haven't actually seen (The Thick of It), In the Loop surely delivers plenty of slime of its own. In the Loop is currently playing at New Haven's Criterion Cinema and will debut at Real Art Ways in Hartford this Friday, August 28, and run through September 10.
Check out In the Loop in theaters, and check out this poor quality youtube copy of Capaldi's absurd Oscar-winning short film, Franz Kafka's It's a Wonderful Life, which stars none other than Richard "Withnail" E. Grant as Kafka.
Posted by Katie Scenic at 11:40 AM