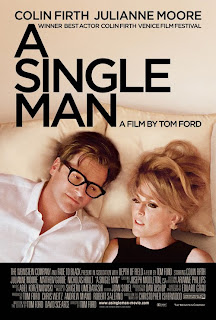 We haven't been to the movies in ages because there's been nothing to see. Now we're excited to check out The Road, but we are even more interested in seeing A Single Man, designer Tom Ford's directorial debut, which stars adorable Colin Firth as a sad (i.e. grieving) gay man, along with lovely Julianne Moore in a 1960s setting. This film promises epic style, obvs, but has already earned rave reviews for its emotionally affecting substance. Total package, anyone?
Regrettably, the movie has apparently suffered some "de-gaying" in its promotion (note the implied hetero movie poster), which Firth discussed in a recent interview with The (gay) Advocate. And unfortunately, it's only opened in NYC and LA so far, which is ridiculous, because here in CT you can have opposite marriage, and you can't in Cali, so we really deserve this movie now. No sign of it thus far on the RAW schedule. Anyone know anything we don't? On the "bright side," this may give us time to read the book first.
Posted by CT Scenic at 2:10 PM