Last week I saw Sherlock Holmes at Showcase Cinemas Buckland Hills. This movie was so mediocre it barely deserves mentioning - the cast and costumes were very attractive, but the script and plot were ridiculous and the overall sensibility was American Hollywood, not at all authentic British, so not at all what I would have hoped for. But I was very excited about the legroom. 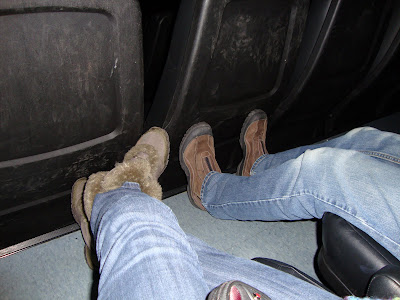 The Showcase Cinemas in Manchester is a true monstrosity I would like to never visit again, packed with an endless variety of gross, grossly overpriced fast foods items, a bar, a zillion theatres with allegedly differing degrees of sound and viewing quality... Having been thwarted that evening by an overzealous traffic cop in what was actually an attempt to see The Road, I settled on Sherlock Holmes, because it was there, and looked less shitty than Avatar (which Jackie Scenic thoroughly enjoyed and may blog about some day).

SH turned to be playing in the "Director's Hall" which I think is slightly more expensive, and puts you through a ridiculous ritual of selecting an assigned seat, and then sending around an usher/waiter to ask you if you'd like to order any refreshments. Had the movie been better, it would have been so worth it, because the DH features super comfy chairs, and most importantly, lots of legroom. Ideal for the fidgety, slouchy movie-goer, who usually ends up rudely wedged against the next chair up (me).
Posted by Katie Scenic at 3:18 PM