Badder Lieutenant: Anybody seen it? 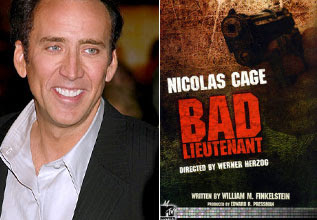 While we understand the perspective that this Nic Cage vehicle is an automatic blaspheme, an unnecessary or irrelevant or untimely... Remake? Re-imagining? Sequel? Whatever it is or isn't, it's directed by venerable Werner Herzog, who made an intriguing case for his film in a recent AV Club interview. In spite of the general irritation and mediocre reviews his awkwardly titled Bad Lieutenant: Port of Call New Orleans has inspired, Herzog manages to come across as both self-aware and yet utterly misguided about the whole affair:

It was a great joy to make this film, and there was a feeling of something hilarious at the same time. Whenever we started a scene, we kind of knew deep inside that it was going to be hilarious... When you see the film with the audience, there’s more laughter than in an Eddie Murphy comedy.

Doesn't that make you curious?

Obviously we didn't rush out to see this movie upon its release, but we may take the belated opportunity this weekend at Trinity College's picturesque Cinestudio.
Posted by CT Scenic at 9:46 PM