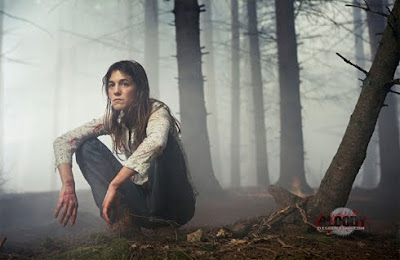 Well I’m so glad I waited for the opportunity to see Antichrist on the big screen. A movie so visually striking, violent, and sexually graphic definitely deserves better than my little shitbox teevee, and a viewing Real Art Ways always feels like participating in the local culture, as well as the broader “cultural conversation” about this controversial film.

Like I said in my earlier post, I was prepared to be offended by this film, since some of the press about it alleged misogyny and even “unwatchable-ness.” But naturally gifted contrarian that I am, I have come to praise Antichrist, not to bury it. ; )

Firstly, I’d like to talk about all the sex and naked time. It is so refreshing to see bodies and sex uality that look convincing (real) on screen. This is in stark contrast to the ubiquitous airbrushed n’ photoshopped portrayal of bodies usually seen in everything from Playboy to so-called women’s magazines, or the slo-mo, pseudo-passionate, poorly simulated sex of Hollywood movies. Willem Dafoe and Charlotte Gainsbourg both have distinctive, not conventionally beautiful features, but their on-screen sex, in spite of the total misery the movie wallows in, is extremely convincing and actually pretty hot, because I’m convinced that they are real people who have had actual sex before. You could probably call it pornographic, but that has kind of an ugly connotation for an arthouse feature (similarly, cheap genre label "horror" could be applied to the scenes of violence and foreboding wilderness).

Director Lars von Trier is definitely making some kind of grand statement about maleness and femaleness and human nature. But is what he is saying extra offensive to women? I don’t feel extra insulted. The female character happens to go completely berserk, commit terrible acts of violence, and feels incredibly conflicted about her identity and sexuality after the loss of her child, but is that really so farfetched? Especially when the male character is such a condescending douchebag. So if you want to read them as archetypes instead of individual characters (which you can definitely make a case for), then if woman is hysterical, man is a douchebag, which isn’t any better.

And let’s face it, no matter how feminist you feel, no matter how much equity should be striven for in certain aspects of cultural life, men and women cannot be the same with regard to reproduction, as women are still necessarily responsible for gestation, birth and breastfeeding. So there’s nothing wrong about women, real or on screen, feeling extra specially identified with and conflicted about their roles as mothers and sexual beings (versus male casual sperm donors), especially when faced with real or fictional tragedies (no matter how calculated) and/or arrogant intellectual douchebags. Or as I’ve always put it “boys have a penis and girls have a reproductive system.”

Towards the end of the film, Dafoe is wounded and struggling, and feels overwhelmed by the fecundity of nature around him in the woods, and has a vision of being descended upon by a hoard of women. But rather than get all offended by this, I’m going to go ahead and think, hey, that’s interesting that von Trier feels so intimidated by vaginas, but it’s ok, men and women really are different and it’s even ok for them to feel bitter or uncomfortable about it sometimes. I know I do!

I could say more, but this is plenty. Your thoughts? Anyone?
Posted by Katie Scenic at 2:41 PM